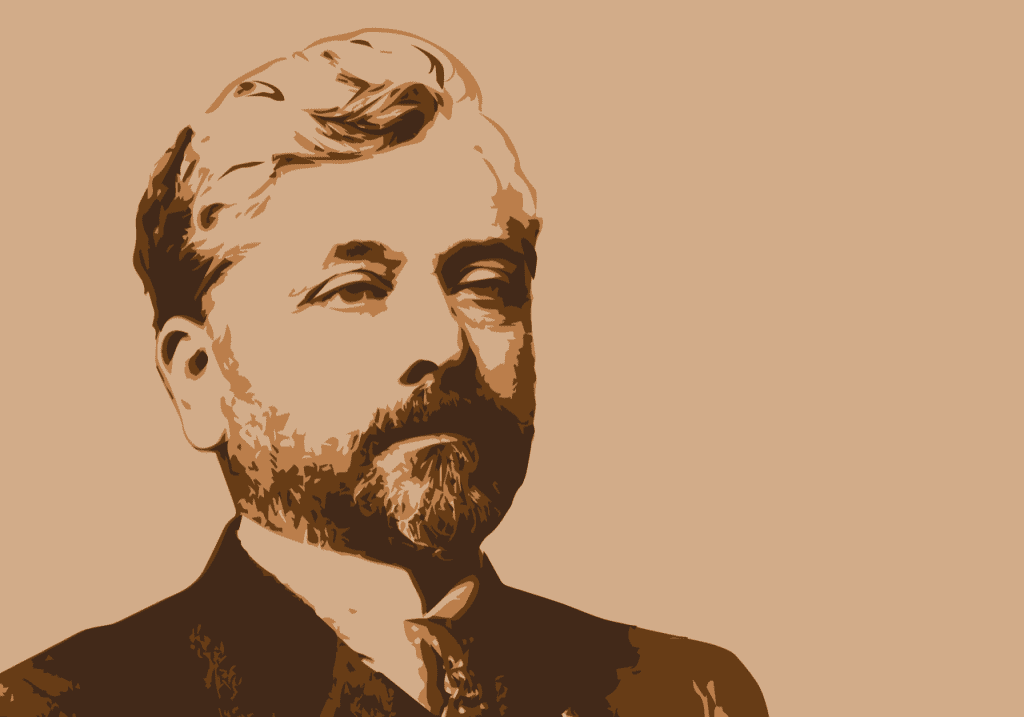 Alexandre Gustave Eiffel was born in France, Côte-d’Or, on the 15th of December 1832. After his Engineer graduation at the prestigious “École Centrale des Arts et Manufactures”, the railway engineer Charles Nepveu, gave Eiffel his first job where he designed a 22 m (72 ft) sheet iron bridge for the Saint Germaine railway. After several constructions including the designing and leading the construction of railway bridge over the river Garonne at Bordeaux, connecting the Paris-Bordeaux line to the lines running to Sète and Bayonne, which involved the construction of a 500m, he realized important objects, such as two railway stations, at Toulouse and Agen and overseeing the construction of 33 locomotives for the Egyptian government. At the same time, he was employed by Jean-Baptiste Kranz to assist him in the design of the exhibition hall for the Exposition Universelle which was to be held in 1867.

Eiffel et Cie
End 1866 Eiffel created his own company at the 48 Rue Fouquet in Levallois-Perret, France. He became the most request civil work engineer designer, building several bridges in Europe, but also all-metal prefabricated building. He created one of the most famous bridge is the Maria Pia Bridge over the Douro in Portugal which with a central span of 160 m was greater than the longest arch span which had been built at the time.
The Exposition Universalle in 1878 firmly established his reputation as one of the leading engineers of the time. As well as exhibiting models and drawings of work undertaken by the company, Eiffel was also responsible for the construction of several of the exhibition buildings. One of these, a pavilion for the Paris Gas Company, was Eiffel’s first collaboration with Stephen Sauvestre, who was later to become the head of the company’s architectural office.
– In 1879 the company was renamed “La Compagnie des Établissements Eiffel”. The company made several important buildings :
– 1879 the Garabit viaduct, a railway bridge near Ruynes en Margeride in the Cantal département. The same year Eiffel started work on a system of standardized prefabricated bridges.
– 1881 Eiffel was contacted by Auguste Bartholdi who was in need of an engineer to help him to realize the interior structural elements of the Statue of Liberty.
– 1881 Eiffel patented the ring-shaped hollow girder floating in a circular trough containing a solution of magnesium chloride in water.
– 1886 Eiffel also designed the dome for the Astronomical Observatory in Nice. 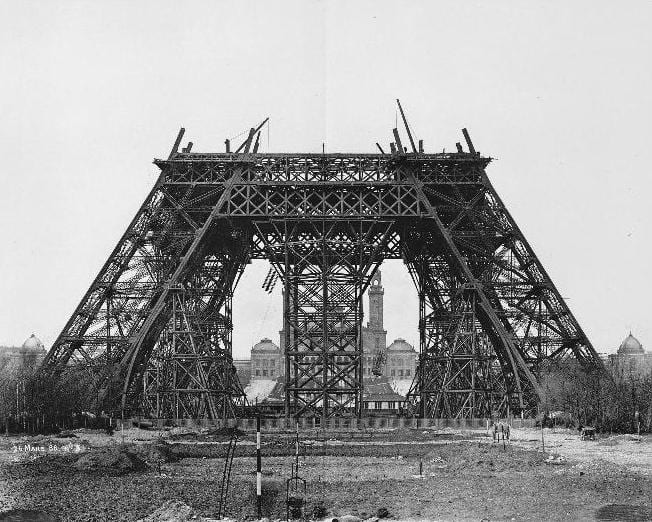 La Tour Eiffel
The design of the Eiffel Tower was originated by Maurice Koechlin and Emile Nouguier, from who Eiffel enhanced idea and he finally bought the rights to the patent on the design. The design was performed at the Exhibition of Decorative Arts in the autumn of 1884, and on 30 March 1885 Eiffel read a paper on the project to the Société des Ingénieurs Civils. After discussing the technical problems and emphasizing the practical uses of the tower, he finished his talk by saying that the tower would symbolize “not only the art of the modern engineer, but also the century of Industry and Science in which we are living, and for which the way was prepared by the great scientific movement of the eighteenth century and by the Revolution of 1789, to which this monument will be built as an expression of France’s gratitude.”
On 8 January 1887, Eiffel signed the construction agreement acting in his own capacity rather than as the representative of his company and granted him one and a half million francs toward the construction costs. This was less than a quarter of the estimated cost of six and a half million francs. Eiffel was to receive all income from the commercial exploitation during the exhibition and for the following twenty years. Later he established a separate company to manage the tower.

Work on the foundations started on 28 January 1887 and finally the Eiffel tower main structural work was completed at the end of March 1889.
Official inauguration of La Tour Eiffel was on March 31st were Gustave Eiffel celebrated this by leading a group of government officials, accompanied by representatives of the press, to the top of the tower. Since the lifts were not yet in operation, the ascent was made by foot, and took over an hour, Eiffel frequently stopping to make explanations of various features. Most of the party chose to stop at the lower levels, but a few, including Nouguier, Compagnon, the President of the City Council and reporters from Le Figaro and Le Monde Illustré completed the climb.

The Panama Channel
In 1887, Gustave Eiffel became involved with the French effort to construct a canal across the Panama Isthmus. The French Panama Canal Company had been attempting to build a sea-level canal but came to the realization that this was impractical. The plan was changed to one using locks, which Eiffel was contracted to design and build. The locks were on a large scale, most having a change of level of 11m.  Gustave Eiffel had been working on the project for little more than a year when the French Panama Canal Company was put into liquidation. Eiffel’s reputation was damaged when he was implicated in the financial and political scandal. Although he was simply a contractor, he was charged along with the directors of the project with raising money under false pretention and misappropriation of funds. On 9 February 1893 Eiffel was found guilty on the charge of misuse of funds and was fined 20,000 francs and sentenced to two years in prison, although he was acquitted on appeal. Later  the American-built canal used Gustave Eiffel new lock designs. Shortly before the trial, Gustave Eiffel had announced resigning from the Board of Directors of “La Compagnie des Etablissements Eiffel”, saying “I have absolutely decided to abstain from any participation in any manufacturing business from now on, and so that no one can be misled and to make it most evident that I intend to remain absolutely uninvolved with the management of the establishments which bear my name, I insist that my name should disappear from the name of the company. The company changed its name to “La Société Constructions Levallois-Perret” in 1893. The company name was changed to “Les Anciens Etablissements Eiffel” in 1937.

Gustave Eiffel, forerunner of modern Aerology and Meteorology
After his retirement from “La Compagnie des Etablissements Eiffel”, Eiffel went on to do important work in meteorology and aerodynamics. Eiffel’s interest in these areas was a consequence of the problems he had encountered with the effects of wind forces on the structures he had built. His aerodynamic experiments and an investigation of the air resistance of surfaces leaded him of building a laboratory on the Champ de Mars at the foot of the tower in 1905 where he builds his first wind tunnel there in 1909. The wind tunnel he created was used to investigate the characteristics of the air foil sections used by the early pioneers of aviation such as the Wright Brothers, Gabriel Voisin and Louis Blériot.
Gustave Eiffel established that the lift produced by an air foil was the result of a reduction of air pressure above the wing rather than an increase of pressure acting on the under surface. In 1912, Eiffel moved his experiments laboratory to a new establishment at Auteuil where it was possible to build a larger wind tunnel, and Eiffel began to make tests using scale models of aircraft designs which led to the creation of wings in modern aviation. In 1913 Gustave Eiffel was awarded the Samuel P. Langley Medal for Aerodromics by the Smithsonian Institution.
Gustave Eiffel had meteorological measuring equipment placed on the Eiffel tower in 1889 and built a weather station at his house in Sèvres. Between 1892 and 1891 he compiled a complete set of meteorological readings, and later extended his record-taking to include measurements from 25 different locations across France which was the first geographical meteorological network worldwide.